Opioid use disorder (OUD) can be characterized as a chronic relapsing illness which, though associated with elevated rates of morbidity and mortality, has the potential to be in sustained, long-term remission with appropriate treatment. OUD may involve the use of illicitly manufactured opioids such as heroin or street fentanyl, or pharmaceutical opioid medications obtained illicitly or used non-medically. While current Canadian estimates are lacking, OUD is estimated to affect approximately 2.1% of Americans.

In 2016, the British Columbia (BC) Provincial Medical Health Officer, Perry Kendall, declared a public health emergency in response to the dramatic increase in opioid-related overdose deaths. In 2016, there were 922 confirmed overdose deaths in BC, of which 215 occurred in Vancouver. BC is the epicentre of the crisis within Canada, with Vancouver’s downtown eastside (DTES) reporting the highest overdose rates. To address the urgent need for intervention a spectrum of services were launched in late 2016 and early 2017. Despite the public health emergency declaration and new services, the number of opioid-related overdose deaths continues to be far above historical averages.

Evidence demonstrates that a significant proportion of individuals with OUD will respond to appropriate doses of Methadone or Suboxone, defined as reduced illicit opioid use (urinalysis) and retention in treatment1. Other predictors of treatment success include shorter time to treatment from diagnosis2, and longer duration of treatment (≥3 years)3. Current data shows that of approximately 9000 VCH Vancouver clients only 3500 are on a therapeutic dose of Methadone or Suboxone, and approximately 4000 are not currently receiving oral opioid agonist therapy (oOAT). The use of slow release oral morphine (SROM) is indicated for roughly 5% of people with OUD and only approximately 0.5% of people are receiving this treatment.

Care for people living with OUD is a complex process requiring collaboration among multiple care providers and services. This is complicated further as providers face numerous obstacles in delivering optimal OUD care due to a variety of social, economic, cultural and medical challenges. Healthcare providers require effective systems to improve access and adherence to OUD treatment among vulnerable individuals.

Increasingly, the healthcare community is employing quality improvement (QI) frameworks to promote system change and address gaps in care. In particular, the Breakthrough Series Collaborative Methodology, developed by the Institute for Healthcare Improvement (IHI), has been successfully applied in the BC context to improve care for people living with diabetes, congestive heart failure, and HIV/AIDS. We will now apply this framework with a goal of improving care for people with OUD. 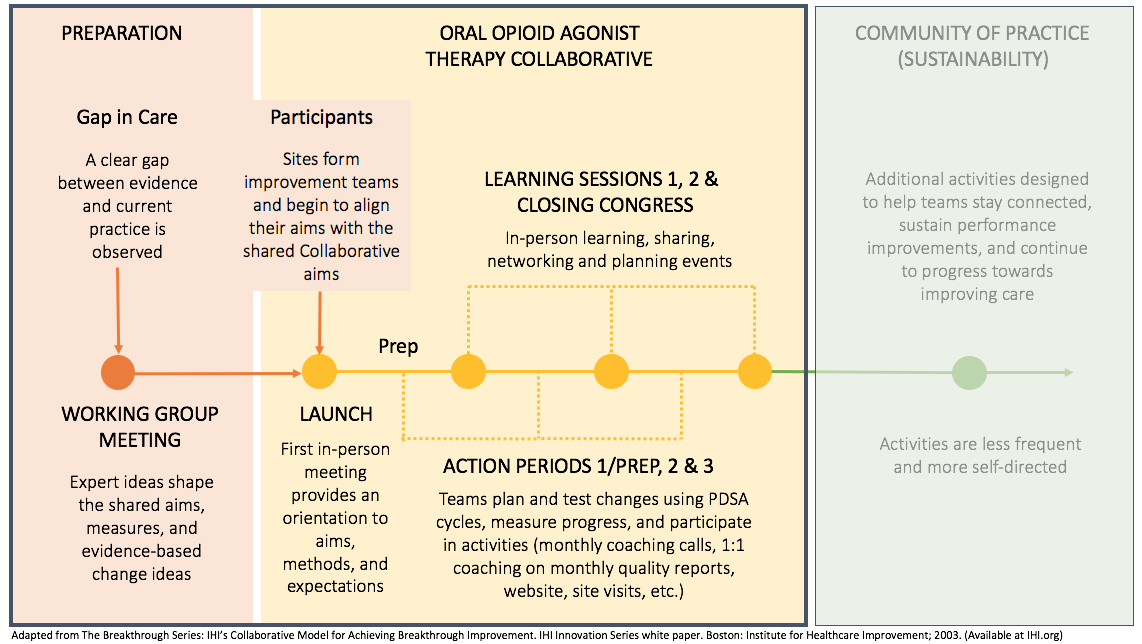 GO TO THE BOOST QI NETWORK

For more information on the BOOST Initiative, please contact us at: boostcollaborative@bccfe.ca.